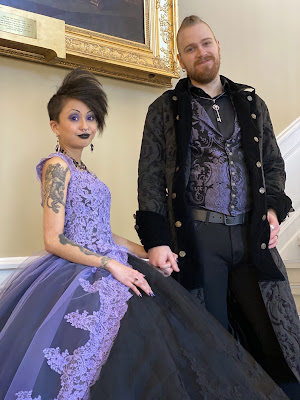 On Saturday, October 17th, we got married! We got engaged on our 3rd anniversary in March 2019 (you can read how I proposed here), and around the holidays / new year's we decided on the date. Up until about 6 months before, I felt time was moving so slow. Then the pandemic hit, which of course put the entire wedding in jeopardy. We decided that we would get married anyway, but a party might not happen. Luckily Norway did really well, but the month before the wedding we got scared again, as our city was hit hard by a second wave, and we went into a little lockdown again. We managed to squash it down, and we decided to go ahead with the wedding, with restrictions of course. 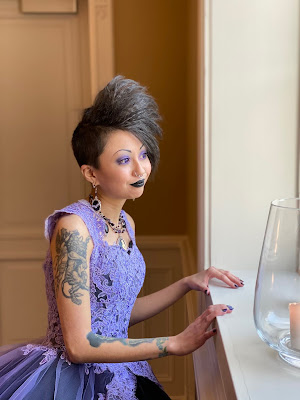 We livestreamed our ceremony on Facebook. Half my family is in The Philippines, so they couldn't make it anyway, and even without covid restrictions there were only room for 20 people in the room. With restrictions, we could only be 10 people, including ourselves! So we had one friend as a witness each, and our closest family. It was a courthouse style wedding, so we were in and out in about 15 minutes! In the photo above I am looking down at my extended family who were waiting outside and watching the stream. After they greeted us as a married couple outside, we drove to my favorite cemetery to have a photoshoot, which had to be cut short because of rain. We still got a bunch of really cool photos, which I'll show you later! 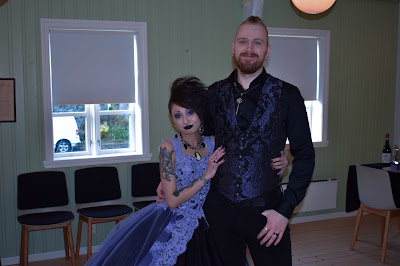 We had invited 80 people, but a bunch of those reside outside of Norway, plus some had to cancel because of various reasons, so we ended up with 35 guests. It was still wonderful, and honestly it made it easier to keep distance between people. Figuring out seating charts is especially hard during these times! We seated 4-6 people per table which were really meant for 8. We had hand sanitizer on every table, by the food and other places around the venue. We also asked people not to shake hands and hug, and keep all other precautions that apply. As far as we know nobody got sick! I am really grateful for that. 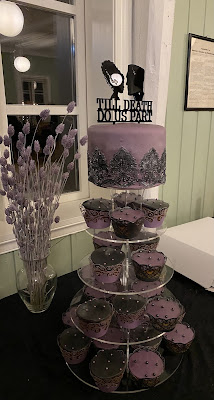 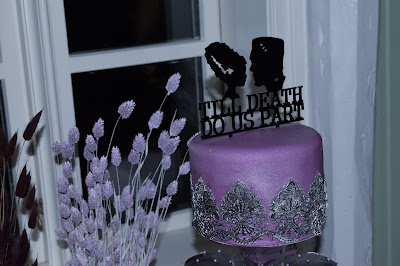 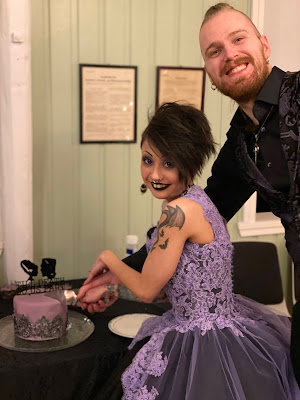 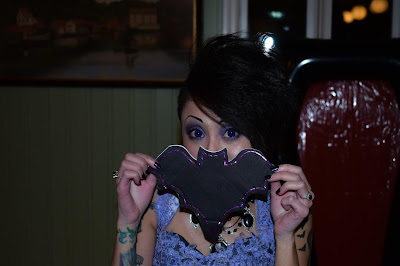 Yup, even the cake and napkins matched our theme! We had a vanilla cake, the black cupcakes were chocolate, and the purple cupcakes were lemon. I got the cake topper custom made, cause I had such a hard time finding a perfect one! Napkins I've never cared for, I'm good with a roll of kitchen paper. That's when my mother-in-law put her foot down, hahaha. I said okay to black napkins for dinner, and then she found BAT SHAPED napkins, complete with a purple border! I never thought I'd be excited about napkins in my entire life.

Cutting the cake was a much more complicated affair than I imagined. We couldn't both stand on each side of the cake, and of course so many people were standing ready with their phones yelling out commands for us to look at them and smile while we did it. My sister filmed the whole thing, and I die of laughter every time I watch it, cause Simen and I are seriously taking turns looking at the camera and the cake, I had no idea! That's why that photo above is extra amazing. Simen hates having his photo taken, so he will rarely look at the camera nor smile. So that's definitely one of my favorite photos. 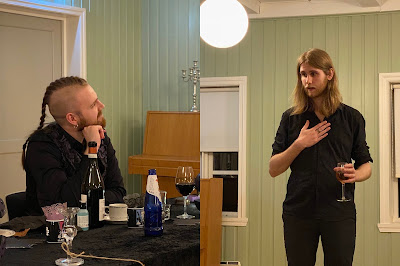 I didn't expect there would be many speeches, so I was definitely surprised! We got to hear childhood stories from family members, movies were made (one which was a collection of video greetings from family and friends all over the world!) and honorable mention to Simen's best man and childhood friend. I actually didn't cry on my wedding day, but during THAT speech I was close. It was so unexpected, so from the heart and full of love. Just look at how they look at each other! What a bromance. Simen is such a wonderful man, and I'm really lucky to have him - and that he feels the same way about me! Ok enough sappiness, I'm not good at it, let's end it on a fun note! 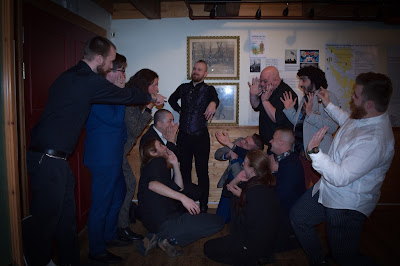 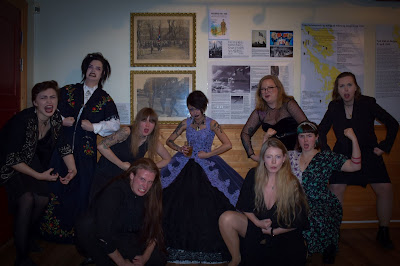 We are all for gender role reversal, equality and feminism! The men's photo was planned, but when the women heard the squealing they wanted to do one too, so ours was spontaneous. These were taken at around midnight, so it was extra hilarious when we were buzzed! You can see I'm holding a glass of strong vodka red bull. Also, I guess it's worth mentioning that we took each other's last names, so we now have the same middle and last name. I didn't want to give up my name, and I love his family and ever since we became a couple, they have been so welcoming, and I fit right in with them, so I wanted to take their name too (which is my mother-in-law's name, actually)! The order of the names was just what we thought sounded the nicest.
People told me that your wedding day will never be just like you planned it to be. It definitely wasn't. A global pandemic and other factors left us with a huge drop in guests, it rained, and yeah. It was still a wonderful day. I was surprised at how chill I was, I didn't feel any stress at all, even though everyone around me did! I only have two regrets, really; Time went by so fast that I felt I didn't take enough time to talk to every person (can you imagine if there were 80 guests?!), and that the playlist I had made wasn't put on until after dessert. So I will share it with you! It's 100 songs and about 8 hours long, and features mostly goth, post-punk etc., but also metal, electronic and pop. Mostly love themed! The entire party cheer-pressured Simen into dancing with me, so we danced to Love My Way by The Psychedelic Furs. A pretty fitting song! It was just as awkward as first dances tend to be. It was mostly Simen taking super long steps and me trying to follow with my stubby legs. After a minute he stopped and said ''Happy?'' and I went ''No wait! Dip me!'' and made a dramatic pose. He did, and everyone cheered.
Suddenly it was 2 AM and we had to go. I wish the day had been longer, but considering how drunk I got and how shit I felt the day after, I guess it was for the best, haha. I don't think I've ever fallen asleep that quickly in my life! My father got really drunk too, I had never seen him like that before. Apparently he hadn't been that drunk for 50 years! A fitting occasion to party hard.
As I'm writing this, it's been exactly a week since the party ended, and I'm getting tired, so I will end this here. In my next post I will probably be sharing the photos from our wedding photoshoot! Hope you have enjoyed reading about our big day. I haven't really posted anything about the wedding planning process, as I wasn't sure that was something people would be interesting. Plus we threw so many traditions out the window that there wasn't really that much to it compared to ''normal'' weddings! But if you're interested in that, need advice or have questions, just let me know. Toodeloo!
Posted by Caroline Åsgård Skulstad at 2:23 PM