All the big announcements!

Hello! I've got lots of exciting things to tell you, so let's get right into it! 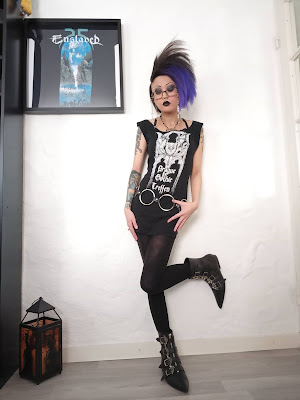 I managed to get new hair just in time for World Goth Day! I debuted it during my set on the big WGD stream. I went to a goth friend who's a hairdresser apprentice, who also cut my hair last time, before my wedding! Since then it's grown A LOT, so it was possible to cut it into what I've been wanting. There's still some bits that need to grow, but we'll get there soon! She convinced me to get the ear tail, something I didn't think would suit me! I absolutely love the color placement she did. I did the actual purpleing at home. At first I used Lunar Tides Orchid Purple, but that somehow turned lavender?! So I mixed a lot of Lunar Tides Nightshade into it, which gave me the PERFECT shade, I am absolutely loving it. Super cool how I can bring the purple more into focus when teasing it, when it's down it's a little more hidden. 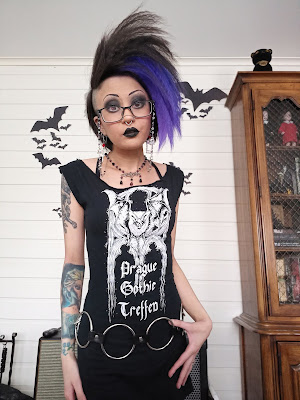 Glasses chain, nose chain, earrings and necklace all by my friend Ayame Designs! Her shop is closed right now because she had surgery, so follow her on Facebook and Instagram to be notified when she's back and peruse her wares! Would be awesome if you could welcome her back with an order.

In other exciting news; Our wedding was just featured in Offbeat Bride! As part of asian and pacific islander heritage month, and also highlighted my autism and how the pandemic actually made things easier for me. And of course, the whole goth thing, haha! They previously featured our proposal story. I love them so much, been following the site for years, and it was such a good resource during the planning. 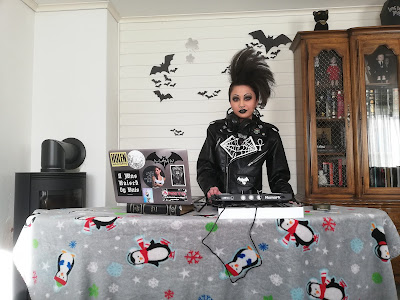 May 27th last year I had my very first DJ stream on Twitch. So on Wednesday I will celebrate my first anniversary! Would love to have you there and party with me. Click here for the Facebook event and here to follow me on Twitch! Geisterwelt is also having their first Twitch anniversary on Saturday, which is also Marlen's 15th anniversary as a DJ!

And last, but not least, I am starting a new project together with FatherEldritch (Twitch, r/goth, Gothy Discord) and CadaverKelly (Youtube, website): Gothy Roundtable! It'll be a casual talkshow where we talk about goth stuff, to be streamed on FatherEldritch's Twitch channel, and then uploaded on CadaverKelly's Youtube channel. Our first episode will go live on Sunday, at 18:00 CET / noon EDT, so come join us! Click here to RSVP to the FB event. 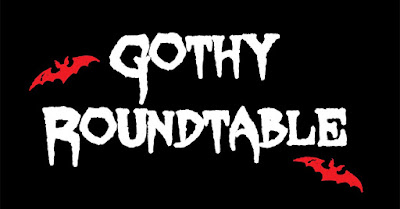 Lots of exciting things happening right now, as you can see! I don't really update much here anymore, especially about personal stuff. Other than Twitch streaming (which I don't feel like posting about here every time, follow me on Facebook to know when I stream) there's not really much happening. I read a lot, that's pretty much it! I can't wait until we can have events again. I've been sad about not being in Leipzig for WGT right now, but the WGD stream was a nice consolation. My social life right now pretty much only consist of Twitch and Discord, which is fine, but even my autistic ass wants to get back out there again! I don't know how I'll cope another year without events. How about you, how have you been holding up? Tell me in the comments what you've been up to, no matter how big or small! Hopefully I'll see you around on the interwebz soon, if not here! You know where to find me.