For their 40th anniversary, I am working with Underground England to bring you a history of goth and other alternative subculture footwear! Super excited about that. The past couple of years I've really been getting into winklepickers, or pikes as they're usually known in the goth scene. They've made a big comeback now, cause when I got into goth, huge platforms was what you'd usually see. Goth fashion is really no different from ''mainstream'' fashion, trends come and go, and get revived a couple of decades later. Right now for example ''mall goth'' fashion is apparently coming back among teenagers! So let's take a look back on how goth footwear has evolved in the past 40 years or so.

The goth subculture emerged in the late '70s and early '80s. A lot of the style was inspired by the fashion at the time, and of course punk fashion. The goths carried over the punk DIY ethic, as goth too is a working class subculture. They took whatever they could find, usually thrifting clothing and making it into their own style.

Footwear though, is a little trickier. Not everyone can make their own shoes! Combat boots (often gotten from military surplus stores) and other working class boots like Dr. Martens were a common choice early on in several alternative subcultures, and still are. Yet that wasn't quite what the goths wanted. 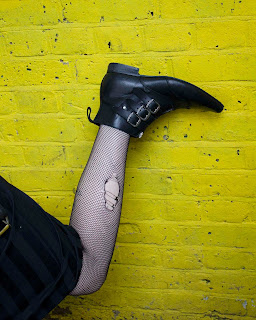 Enter winklepickers / pikes. They are reminiscent of shoes from the far past, like the medieval crakows / poulaines or even victorian boots. Both time periods that would inspire goth fashion later on. The '80s winklepickers evolved from the '60s Chelsea / Beatle boots. Underground, John Fluevog and Bogey's were among the sellers. They come in many different styles, lace-up or zipper, different heights and heels, often with buckles (the coolest ones being bats and skulls, of course). They were used by several subcultures in many countries, here in Scandinavia they were known as "mosquito chasers"! Pikes have become one of the most popular boot styles among goths, but the later resurgence of platforms or other big stompy boots knocked them out for a while, at least with the younger generation.

Creepers have also been relatively popular among goths, but are maybe more used by other subcultures. They have a long history, from post-WWII, to later being adopted by teddy boys, rockers, punks, goths, new wavers, psychobillies and more. Robert Smith of The Cure has been known to use them, which probably contributed to goths wearing them. I have seen lots of videos and photos online from the 80s where people called themselves Cureheads (and not goths), and adopted his style, which is still very iconic among goths today! 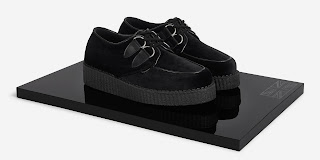 Coming into the 90s, brands like New Rock, Pennangalan, Steelground and T.U.K. were popular. Shoes were getting weirder, bolder and bigger. This is when you started seeing platform boots being adapted by goths. Goth fashion was evolving. The big hair of the 80s disappeared, many sported long and flat middle-parted hair. The clothing got more romantic, drawing inspiration from historical fashion - fittingly vampires had a big boom then, so it was of course embraced by the goths. But you also had industrial starting to merge with goth. The rivetheads brought shiny clothing and big boots to the table. The two subcultures are still very intertwined today, even people within the scene(s) can have trouble telling them apart.

This carried on into the new millennium. Now rave was thrown into the mix, creating cybergoth. The platforms got even bigger. Neon colors were used to contrast the black, and technology was an influence. This was also around the time ''mall goth'' became a thing, mainly influenced by metal music. Tripp pants, Demonia boots, Lip Service (since 1985), Cyberdog, Hot Topic.. Goths and other alternative people now had even easier access to cool clothing. 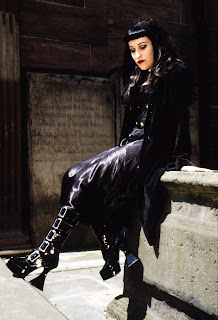 The 2010's saw several revivals. I saw creepers come back pretty early on, maybe together with the rise of the ''pastel goth'' and ''nu goth'' fashions. Big heels and platforms were still popular though. Victorian and other historically inspired fashions were also pretty big. Musically we had both the deathrock and post-punk revivals the years before, which also influenced fashion. Pikes came back big time, with brands such as Gothic Shoe Company, Goth Pikes, Strangecvlt, Poison Shoes and Bats 80s Shoes popping up to try and satisfy the demand.

Goth fashion today is incredibly diverse. From your casual jeans, t-shirt and combat boots, to trad goth and deathrock, but also non-music inspired styles like victorian goth, rivethead, cybergoth, pastel goth and nu goth. Whether we like it or not, things change and evolve, but trends also come back about every 20 years or so. Goth is now over 40 years strong, so it's no surprise to see that the fashion has changed so much, but also brought back older fashions. The music has been amazing throughout all of it too! It's been really fun being along the ride, and it will be interesting to see what the future brings.

Now let's hear from Underground themselves about their history on creating footwear for goths and other alternative subcultures for the past 40 years! 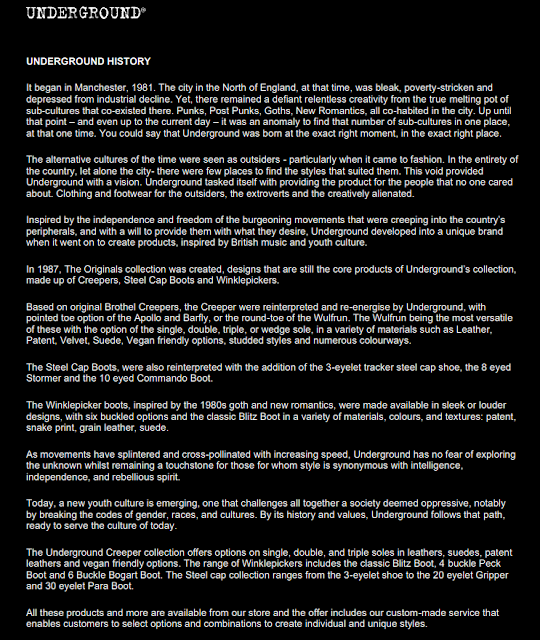 Check out their website to learn more about them and their history, there are lots of articles about subcultures and music, and of course their store which features more than just shoes! They also have a Facebook, Instagram and YouTube channel. 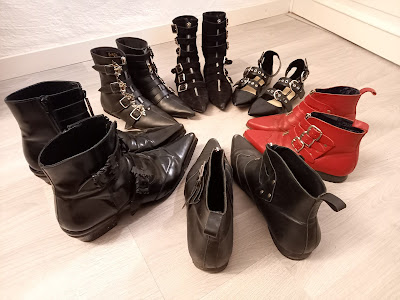 Hope you enjoyed this article! All photos except this last one have been provided by Underground. In my own photo you can see all the pikes my husband and I own, my newest ones are the red ones from Underground, but I got them second hand, thanks to my ''fairy pikemother'' Jez! Thanks to her three of my four pairs are second hand. You can buy a custom made pair of them here. I think I need to get Underground to create the only thing I feel I'm missing; purple leather (NOT suede or velvet) pikes!
Posted by Caroline Åsgård Skulstad at 4:59 PM 3 comments: